With the growing demand for live video streaming, CDN77's stack keeps evolving as well. After some initial testing, we are happy to announce that we now support the SRT ingress feed. Why should you care about this new feature?

Since its introduction in 2005, RTMP has become a de facto standard for live streaming. Even today, it's supported by most platforms. Its role, however, has changed throughout the years and has become mostly transit protocol.

The list of cons regarding RTMP is pretty extensive. To name a few:

SRT stands for Secure Reliable Transport. The protocol itself has its roots in the UDT project and uses similar, more refined methods for connection, sequence numbers, acknowledgments, and re-transmission of lost packets.

In many ways, SRT is a game-changer since it addresses many problems everybody has. Let's break down what it actually solves.

This is possibly the greatest selling point of all. SRT is designed to recover from a severe packet loss and adapt to an unstable network.

Generally speaking, packet recovery through TCP imposes a significant bandwidth overhead. SRT uses optimized re-transmission mechanisms to do so very efficiently at the application layer while utilizing UDP for transport.

As you can see above, signal characteristics change due to network conditions such as packet loss, jitter, and so on, giving video decoders a hard time. SRT comes with an in-built reconstruction mechanism that recreates the signal characteristics on the receiver side. Normally this would be solved by buffering, but that would also increase latency.

The low latency of SRT is tightly related to the previous point. UDP transmission is unreliable by default, but overall a much faster, simpler and more efficient protocol than TCP.

Since the unreliability problem has mostly been overcome, latency has hit a new low. It allowed for a reduced buffer size to reduce latency even further. This allows SRT to deliver the stream at consistent sub-second latencies!

In practice, most of the glass-to-glass latency arises from HLS/DASH packaging. But, even when used only as a "first-mile" protocol, SRT can cut a few seconds from overall latency.

With SRT, the payload doesn't matter. You are free to use newer formats such as H.265, VP9, or AV1 since SRT is purely a transport protocol.

As for container formats, MPEG-TS is currently the most common format sent using SRT.

As mentioned above, RTMP is a bit lacking when it comes to security. SRT, on the other hand, comes with built-in end-to-end encryption. It uses a standard cryptographic algorithm (256-bit AES), but the whole encryption mechanism is unique to SRT.

Not to get too technical, it uses two sets of keys, a short-lived Stream Encrypting Key (SEK) to encrypt the media stream, which is encapsulated in a Key Encrypting Key (KEK). For connection-oriented transport such as SRT, there is no need to periodically transmit the SEK since no party can join the stream at any time.

Here's a tl;dr summary of RTMP vs. SRT . 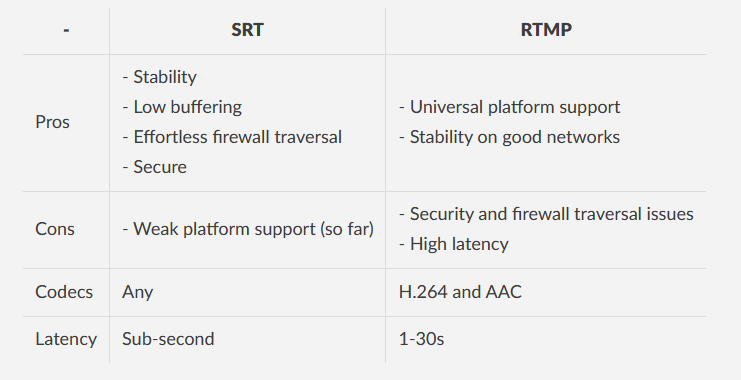 If you happened to stumble upon our article and are looking for a video delivery solution, you can find more information about our video-friendly CDN here.

Our clients are already making use of SRT. So far, the most used setup is with FFmpeg and OBS Studio encoders in a caller mode (push). If you would like to try to set up SRT for your stream, don't hesitate to get in touch with our support.